As a active fan club member of the Gary Allan Fan Club, you have the advantage of getting tickets to see Gary Allan LIVE! Often before they go on sale to the general public!

We know you all have great stories about how and why you became a Gary Allan fan, and now is your chance to share it with the world. Beginning in March, we will be selecting a Fan of the Month. Each chosen fan will receive a Gary Allan prize pack in the mail and will be featured in the fan club section.

All you need to do to enter, is head over to the fan of the month form and fill it out. Each month, we will randomly pick a member, who’s membership is in good standing, to be our featured fan.

We can’t wait to hear all of your stories!

CLICK HERE FOR THE FAN OF THE MONTH FORM

Congratulations to our Gary Allan Fan of the Month for December 2021, Allison N from Nebraska! 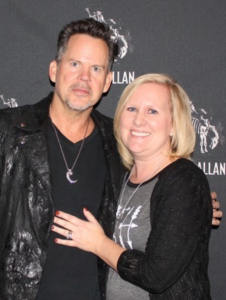 Where are you from? Nebraska

How Long Have You Been a Gary Fan? 26 Years

How Did You Discover Gary’s Music? 1995 – I heard “Her Man” on the radio and have been listening ever since

Favorite Song? Totally depends on the mood I’m in. Some favorites include “Bourbon Borderline”, “High as I’ve Ever Been”, and “Half of My Mistakes”

How Many Times Have You Seen Gary Live? What is Your Favorite Show? I have no idea how many times I have seen Gary live, but have been seeing him a few times a year for probably 20 years. My first show Gary opened for Brooks and Dunn in Omaha, NE. I was the only person standing in the entire place. My friends were so embarrassed. I love outdoor venues. One of my favorite shows was somewhere in Iowa. It was an intimate venue beside a river. It felt like he was playing in a backyard for some friends and was AWESOME!

What’s One Thing That Sets You Apart from Other Gary Allan Fans? I have to be one of his most loyal. longtime fans. I am pretty sure I know the lyrics to just about every song he has ever released. I also feel like I could kick some serious butt at Gary Allan trivia. Too bad that isn’t a thing.