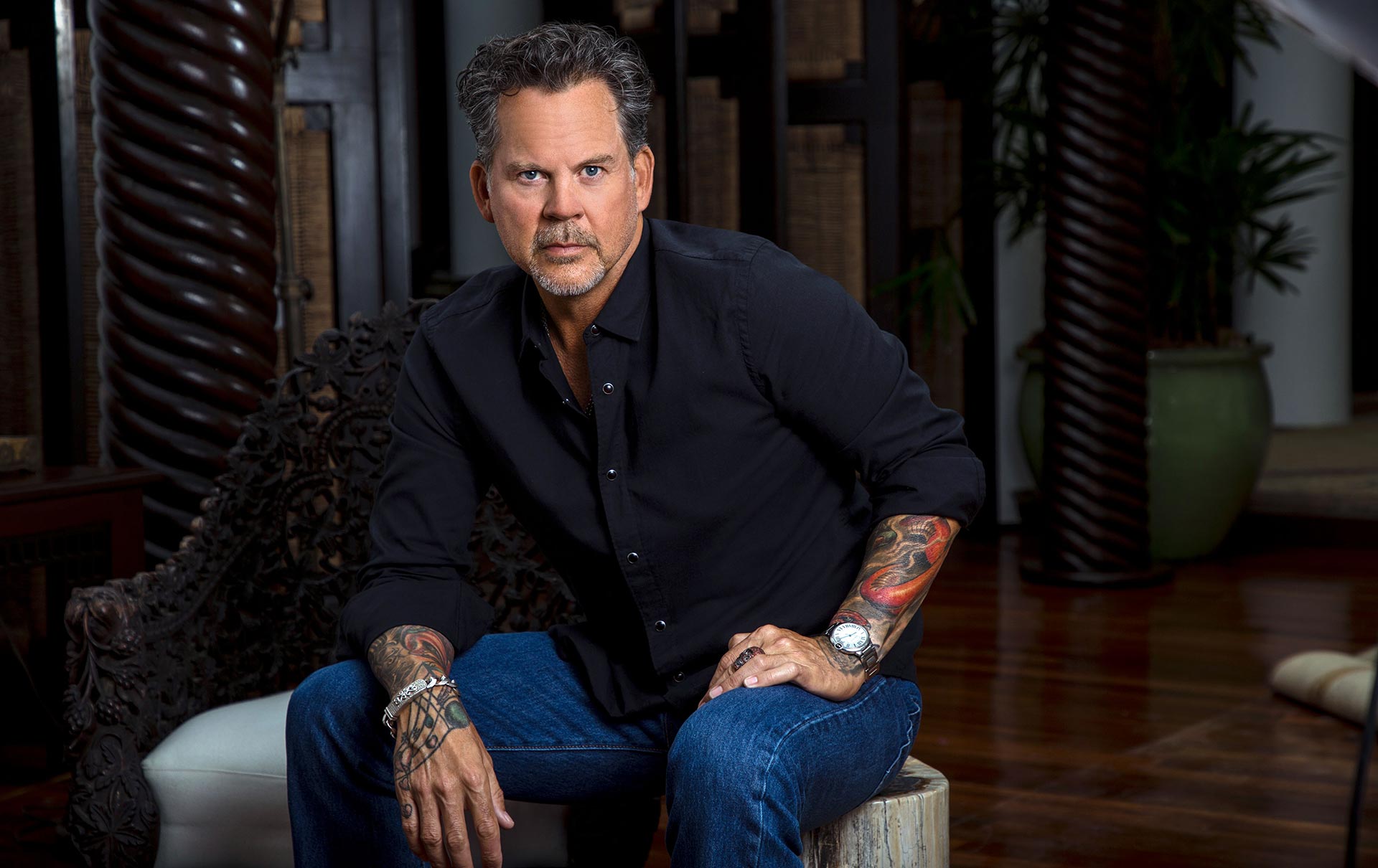 In Nashville, before anyone ever referred to the southern end of Broadway as SoBro, the Hillsboro Village neighborhood boasted Sunset Grill, a restaurant that during the 1990s proved as integral to Nashville recorded music as other metropolitan eateries that over the years became legendary hubs for creative businesses in New York and Los Angeles.  It was a sprawling and long-lunchy and late-dinnerish breadbaskets-and-virgin-olive-oil thing.

“In the mid- ‘90s,” the California-born country star Gary Allan recalls, “I would go find my whole record label at Sunset Grill.  People called it The Devil’s Triangle back then.  Most songwriting would stem from showing up there then winding up at somebody’s house at midnight.”  In 2015, when the restaurant closed, The Nashville Scene dubbed Sunset Grill a “grand ‘90s lady.”

Ruthless’, Allan’s new album and his most commanding work ever, tells the story of the move of the Nashville country business — often as confusing as it has been successful — from the 1990s to right now, when it hums along silently, smack in the middle of what industry folks call The Streaming Era.

Simple nostalgia is the last thing on the album’s mind.  To arrive at this rocking, swinging, loud, subtle, funny, sad, tricky, and sizzling suite of thirteen songs, Allan has refused to rush: He has afforded himself what probably is, certainly as the 2020s have unfolded, today’s supreme luxury: time.

“This,” Allan says of ‘Ruthless’, “is a montage of everything I have done since my last album.   It’s what I love.  I remain influenced by the ‘90s — as well as by the ‘80s.  Twenty-six tracks were cut for this album.  Then I went back to the studio and recorded three or four more tracks. Then I returned for two more.  From each of these many sessions, I pulled out the cool stuff that I wanted on the record.”

Eventually, Allan scribbled all his song titles on weird shapes he devised from paper towels; he then left these flimsy yet critical components of what became ‘Ruthless’ on his kitchen counter.  “I would walk past that counter constantly,” he says of an album sequence that it seems no exaggeration to call masterful, “arranging and re-arranging these pieces of paper towels.  Eventually, after quite a while of fooling with this, I’d go, ‘Yeah.’”

Allan knew well that those paper towel scraps represented finished tracks such as “Temptation” and “Sex” and “Slide” and “Waste of a Whiskey Drink” –songs he would use to tell his ‘Ruthless’ story as only a guy who had grown up skating and surfing in Orange County, as a Social Distortion fan playing in punk bands — but also in his father’s country band – might convey.

“I viewed all that countertop work as putting a show together,” Allan says.  “You can’t start out with something sad or slow, because that establishes initially the whole night.  You do have to come out and set the tone.  Then stand back and tell your story.”

Of course, Allan recognized, working through his marathon ‘Ruthless’ sessions, that country singers rarely if ever accomplish great work utterly alone.  He calls himself a “lyrics guy and a guitar player guy,” and this last he considers part of his California birthright.

So for the ‘Ruthless’ sessions, Allan ensured that his favorite guitar players, in-town or flown-in – David Steele, Tom Bukovac, Ryan Wariner, Anthony Rankin – appear.  But Allan also chose to collaborate with Mark Wright and Tony Brown, two producers whom Allan, a Nashville resident since he moved to Tennessee at 26 after what he calls his “punky little rockabilly” Orange County youth, could not help but know bring particular voices to any music they oversee.  And it was not as though Wright and Brown, for Allan, were aliens sitting behind glass in swivel chairs.

He had worked with Wright — the quick-minded son of a symphony conductor, a record man whose sense of musical structure and arrangement is second to none — on his first Nashville recordings for Decca Records. Allan, moreover, had teamed with Brown — Elvis Presley’s last pianist, an eternally stylish North Carolina native who always has championed strong artists whether they lean easily accessible or challengingly out-there – when he later moved to MCA Nashville Records.  That move kicked things off in 1999 when Allan’s ‘Smoke Rings in the Dark’’, where the three men joined forces, effortlessly went platinum.

“I’m an old-school West coast tell-it-like-it-is,” Allan sings, opening “Unfiltered,” near the last third of ‘Ruthless’, coining a new noun and bragging about taking his coffee black.  Guitars strum and caress but also rage in mid-tempo as keyboards and other more intense guitars somehow begin to soothe music that really cannot be soothed.  Still, Allan has never been the kind of country artist to shake his first, railing against music that does not particularly compel him, ‘80s-style; instead, he focuses jealously on what does excite him, what he and only he tries to pull off.

This is why ‘Ruthless’ really is the damndest album.  Mentioning the title track, Allan talks about it like this: “Ryan Hurd, Hillary Lindsey and busbee wrote the song.  I hear it as a kind of Elvis-like music, late Elvis, like ‘Suspicious Minds’ or ‘Burnin’ Love.’  I think we captured that on the track.  It’s layered harmonically and rhythmically.  I think we nailed it.”

But “Ruthless” is hardly a late-‘60s sonic re-enactment of Late Presley rendered in noise-free digital splendor; the track sounds new in a way similar to how post-Garth Brooks country re-energized itself and ignored stylistic rules following seasons of strict New Traditionalism.  In 2021, when listeners go for anything that sounds good to them irrespective of style or genre or national origin or anything, this does not qualify as fond looks back.

“What I Can’t Talk About” could not exist without a charging tom-heavy rhythm track as or more robust than any cool drum programming; in a song that asks folks to throw on headphones and listen to a man sing about things he cannot communicate in regular speech, that foundational drumming only makes his request sound more urgent.

“Goes good with a record,” Allan sings on “Sex,” a groovy, deceptively gabby tune with a gigantic and inclusive message, a track that sustains its argument that “They ain’t made nothing quite like it yet” while investigating the part sex plays in at least some text-messaging.  “It’ll take you to a bar/It’ll will take you to the moon…” the song concludes.

“Slide” is the slowly galloping song of a man who admits he often screws up; when the background vocals creep and slither into the music to accent the song’s title, they themselves are sonically imperfect in a perfect way for the music. Allan calls it “very East Nashville.”

In “Waste of a Whiskey Drink,” a man sings about a woman who, he warns, is going to “climb in your car” and/or “mess up your sheets” and/or “sleep with your friends” and/or “string you along” after the man gives her his heart.”  Much of the action occurs in bars.  The music, through cagey repetition, builds a rhythmic tragi-comic momentum.

And then there are those guitars one receives as California birthright.  They show up as frequently on ‘Ruthless” as cocktails and falling spaghetti straps however they appear in eclectic ways.  On “Little Glass of Wine,” a deliberate love song addressed to the grape, the guitars are jazzy and Sinatraesque, as if the late great Hollywood crooner just climbed off a Harley.  On “The Hard Way,” the overwhelming finale of ‘Ruthless’, they ring out and build and flex their arena capabilities as Allan keeps near-chanting borderline amelodic claims of “God gave me the rain/To wash away my pain” and, at one point, cites “what Robert Johnson sang about.”

“I look at an album,” Allan says, again, “like a show: I have to come in and give some bang right off the top.  And then I can slow down.  I feel like it’s walking through your moods.  Like a pool hustler or prizefighter, you don’t want to come out swinging with everything you got.  You want to reveal the whole array of emotion.”

‘Ruthless’ is an old-school West Coast tell–it–like-it-is and it is a new Gary Allan album, super-deluxe, as well.  It is modern as all hell. It lives off the literary chops of country songwriting immemorial.  Yet it intertwines finely the innovations of Nashville in the ‘90s with Nashville in 2021.  It is country that still has, to paraphrase Allan in an intricately written love song called “Pretty Damn Close,” a little glitter in its hair.